When someone said to me, there is a ‘Fish era Marillion tribute band’ called Mr Punch, at the Abingdon Northcourt, I had to admit I was sceptical about them.
When they also mentioned they were Italian, I laughed. Lets be honest now, an Italian man called Alessandro Corvaglia, singing the songs of a Scottish man called Fish and accompanied by a band lead by a female guitarist called Marcella Arganese…….I really had to laugh. Steve Rothery, the guitarist in Marillion to this day, is God of the guitar.
Nobody is going to make those songs work other than him. And Fish, well as far as I am concerned Fish is a man nobody could ever replace.
Now lets be clear about this before we get too carried away. Steve Hogarth does a good job with the Marillion boys, but I was and always will be, a Fish-era Marillion fan.
So Alessandro and Marcella had their work cut out to convince this fan they were worthy of singing not only the songs, but worthy of standing in the very shadows that Marillion once cast. The band had chosen the Fugazi tour set of 1984, I knew it well. Throw in side one of an album called Misplaced Childhood, that’s the one with Kayleigh and Lavender on it by the way, and we have a set list I had to see.
As the lights dimmed, the drums of Roberto Leoni, the bass guitar of Guglielmo Mariottia and the keyboard playing of Luca Scherani started to fill the hall with the opening track of the Fugazi album, Assassing. There was the sound of chanting as Alessandro entered the stage, but the moment was shrouded in amazement as Marcella started to play the familiar work of Rothery. 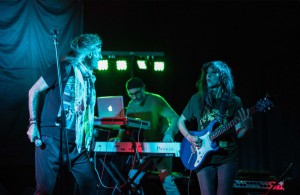 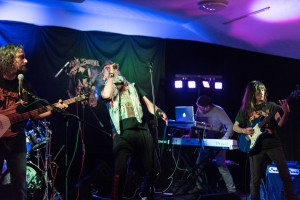 My jaw dropped as I watched these 5 people take on the band that I had seen so many times before. They went from track to track, Punch and Judy, Cinderella Search, Kayleigh, Lavender with pure ease. Alessandro filling in with small stories between tracks, just as Fish would have back in the day and still does at his solo gigs; albeit with an Italian accent. The highlight for me was Script For A Jesters Tear.
I am proud to say I was at the Marquee when Marillion introduced the track to the world and it remains high on my list of favourites to this day, however Mr Punch showed me it could be played exactly as it was meant to be played. There was no stopping this set.

I have to say closed because for some reason the houselights came up and they never came back on stage to perform the single Market Square Heroes from 1982. I will always be remembered for waving the setlist around in the air knowing I had been cheated out of something very special. Mr Punch took my breath away and as a collective unit they create something extremely special which allowed me to visit my teenage years and beyond. They brought a magic to the stage I had not seen since 1987 and they owned it all night. In my honest opinion they are the power and the glory that was Marillion.
We march!

Hoping this world will be better!!
Hoping we will find a way together
the beauty in music is all our friendship even if just in a glance, in a smile, in few words!!
this is for you, we're trying not to stop so that we can give you our hugs, let you feel that we are with you!
hug you all!! <3

Share on FacebookShare on TwitterShare on Linked InShare by Email

Mr Punch is with Scalia Giuseppe and 24 others.

Hi wonderful friends!!
we really miss our life, our jumps, our laughs, our hugs ... miss you all, the beauty in music is all our friendships also in a glance, in a smile, in few words!! this is for you, we're trying not to stop for giving you our hug, our closeness in these days! <3 ... -5 ;)

waiting to play louder!!
hug you all!!

Share on FacebookShare on TwitterShare on Linked InShare by Email